How Artificial Sweeteners Are Destroying Your Gut 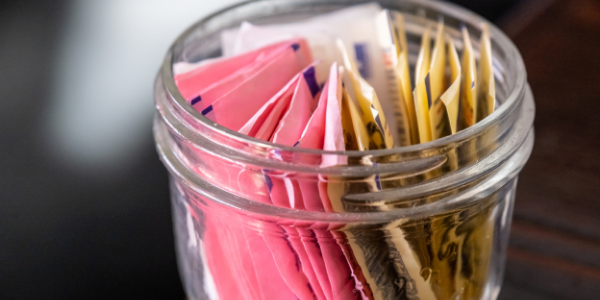 Option A is a can of regular cola with 39 grams of sugar.

Option B: a diet/sugar-free/calorie-free soda with a bunch of chemicals you can’t pronounce.

Clearly, neither is the best for optimum health. But let’s say you’re addicted to soda. You know that in order to alleviate the pain and inflammation that’s been nagging you for years, you’ll have to eventually wean yourself off of soda.

(Through my RECLAIM YOUR LIFE program, I’ll help you overcome cravings for foods and drinks that sabotage your health!)

So you decide that in order to win the battle of the bulge, the clear choice is to pick option B. Diet soda and other drinks and foods with zero-calorie sweeteners must be better than real sugar, right?

But there’s a dark side to the pink, yellow and blue packets of artificial sweeteners. Many research studies show that fake sugars negatively alters your gut microbiome.

What Is The Gut Microbiome And Why Is It Important?

You’ve probably heard about “gut health” and the “gut microbiome.” But if you’re not really sure what it is, here’s a crash course. You have just as many bacteria cells as human cells in your body—if not more. It’s creepy to think that we may be more microorganism than human, but bacteria help keep us happy and healthy—if we feed it the right kind of food.

Trillions of bacteria live rent-free in your intestines (mostly in the large intestine, if you’re healthy), feasting on an all-they-can-eat buffet. Bacteria help us digest our food. There are about 5,000 different strains of bacteria in the gut. What you feed your gut greatly impacts all aspects of your overall wellness.

In fact, your gut functions like your body’s second brain. Your gut and brain are constantly communicating with one another. But if you eat a diet high in sugar and processed food, your brain and gut communication becomes less effective.

As a result, neurotransmitters (brain chemicals) that make you feel happy such as oxytocin, dopamine, endorphins and serotonin—which is actually mostly produced in the gut—don’t get activated.

And not only does your gut bacteria affect mood, it also profoundly influences your immune system. In addition, your gut bacteria controls your appetite. And the microscopic critters in your gut also influence your energy levels. The health of your gut bacteria determines whether you will wake up feeling energized, ready to conquer the day—or feel like a slug.

Artificial Sweeteners: Just As Bad For The Gut As Real Sugar?

When you eat lots of sugar, fast food and heavily-processed packaged foods, yeast (a fungus) and potentially-harmful bacteria overtake the good bacteria in your gut. This leads to increased appetite and promotes inflammation and diseases such as diabetes, obesity and other metabolic imbalances.

You don’t catch fibromyalgia and rheumatoid arthritis out of the thin air like you do a cold. These autoimmune diseases are thought to be caused in great part by your gut microbiome.

But swapping regular sugar for Splenda, Sweet N Low, Nutrasweet, and other fake sweeteners can damage gut health just as much as regular sugar.

Many studies (like this one) show that ingesting large amounts of artificial sweeteners reduces the population of beneficial bacteria in the gut and increases the amount of bacteria strains that may harm your health.

Is one packet of fake sugar added to a cup of coffee really going to screw up your gut bacteria balance? Probably not.
But how many people are limiting their consumption of lab-produced sweeteners to just one packet a day? Not many, considering how common high-fructose corn syrup is in our food supply!

In a study from Israel, researchers showed that when mice were fed six common fake sweeteners (including aspartame, sucralose, saccharine, and acesulfame potassium-k), it caused e. Coli bacteria to release toxins. Think about that next time you have the urge to drink diet soda.

(E. Coli is responsible for poisoning over 265,000 Americans every year, mostly due to undercooked meat. But e. Coli isn’t a bad guy. Every single one of us has e. Coli living in our gut. The problem with e. Coli is when too much of it is in our gut—or when it’s fed fake sugar and releases toxins.)

Other Reasons To Avoid Artificial Sweeteners

Fake sugars are engineered to taste hundreds or thousands of times sweeter than regular table sugar. Even though they are calorie free, fake sugars stimulate the brain’s reward center. And we all know what happens when your brain’s reward center is activated from eating just one little cookie—you want another one.

So fake sweeteners tell your brain to reward you more and more. Not only that, high-fructose corn syrup shuts off the gut’s communication with the brain’s satiety hormones. In other words, your brain doesn’t get the message that you’ve had enough to eat. This explains why when you pour Heinz ketchup on your burger and fries, you’re still hungry after eating a huge meal. (It’s my hope one day that Heinz will stop using corn sweetener, but it’s cheap so that’s why they add it; they want you addicted to it!)

It may seem counterintuitive that a zero-calorie/zero-sugar product can raise insulin levels. But that’s precisely what happens. Even before you take that first sip of coffee with artificial sugar, your stomach is responding to the mere sight and smell of the sweetener. This in turn, releases insulin. Granted, the rise from just one packet might be very small. But when you already have blood-sugar issues, why tempt fate?!

What To Do If You Have A Sweet Tooth

Life’s too short to eat nothing but kale salads and drink spinach smoothies. We all deserve to have a little sweetness in our life. But if both real and fake sugars are bad for our health what are we supposed to do?

I will help you overcome excess sugar consumption (both real and artificial) without sacrificing your enjoyment of food.

Get in touch with me to learn more…