3 Reasons Why You Should Avoid Artificial Food Coloring (Dye) 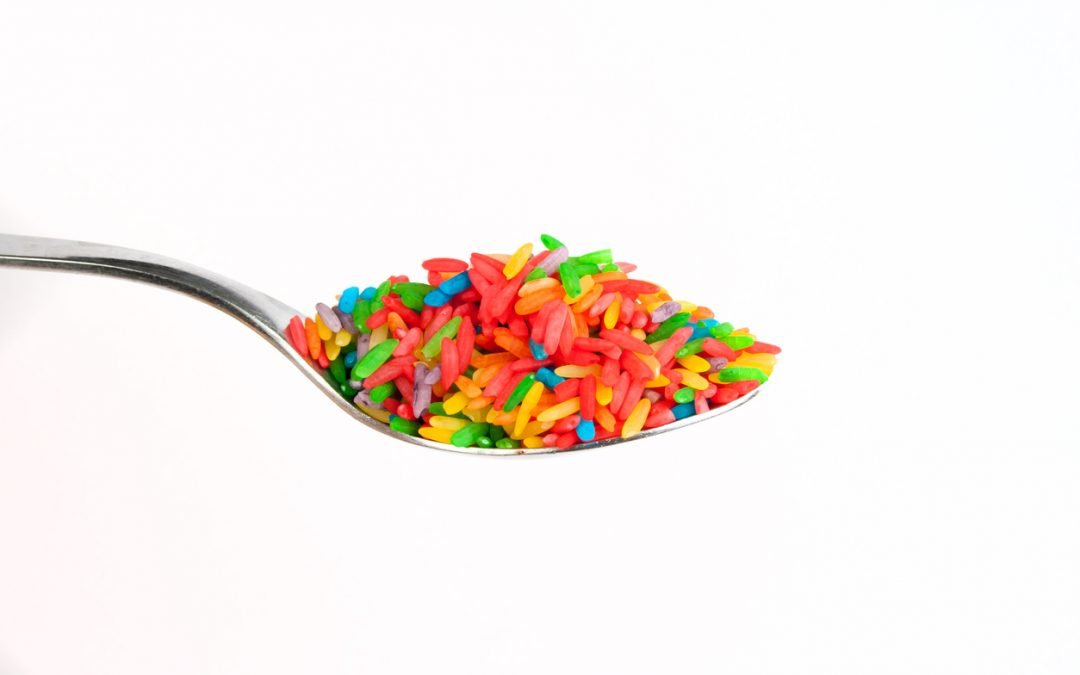 Over a year ago, I covered how artificial sweeteners can ruin your gut health and lead to weight gain, even though they are calorie-free. This time, I’ll be talking about something else that’s fake that can be detrimental to your health: artificial food coloring, aka food dyes.

No, food dyes won’t make you die. But research shows that they may harm your healthy by:

So think about that this holiday season, when you’re going to a Thanksgiving or Christmas party and there’s a big spread with cookies and other treats. The problem is that the standard American diet is loaded with artificial food coloring.

The simple solution, then, for avoiding food dyes is to eat real food. And the way you can tell if it’s real food or not is 2 ways:

If your diet mostly consists of real food then you don’t have to worry about consuming artificial food colorings. But if you or your kids eat a lot of things that come in a package, then here’s why that might be bad news…

The truth is that there is not an absolute causation between food dyes and ADHD. But the correlation is very strong and well-researched. In fact, research in the journal, Neurotherapeutics says that the effect of artificial food colors (AFCs) on child behavior has been studied for more than 35 years. Make it more like 45 years because the study is from 2012.

And after nearly a half-century of research, here’s what we know. Food coloring, even though they are not a major cause of ADHD, “seem to affect children regardless of whether or not they have ADHD, and they may have an aggregated effect on classroom climate if most children in the class suffer a small behavioral decrement with additive or synergistic effects.”

In other words, a little bit of Red #40, Yellow #5 and Yellow #6 can go a long way in negatively impacting class behavior. All it takes is one class clown eating a bag of junk food colored with food dye to trigger juvenile delinquent behavior.

The three food dyes I mentioned in the previous paragraph make up 90% of all the food dye used in the US. Researchers say that food colorings “may contribute significantly to ADHD, … and in some cases may push a youngster over the diagnostic threshold.

Food dyes are a troubling trend, considering the fact that the average daily consumption of them have increased by 500% in the last 50 yrs.

And here’s another reason fake food colorings should be greatly reduced in the food supply: “With the current concerns about childhood obesity, there appears to be no need to make food look more attractive than its natural color.”

Here’s another reason to avoid artificial food coloring. According to research from  Alternative Therapies in Health & Medicine, they’re made from petroleum. Now that’s food for thought! So what’s the problem with ingesting a little petroleum? Well, for starters, “The molecules of synthetic colorants are small, and the immune system finds it difficult to defend the body against them. They can also bond to food or body proteins and, thus, are able to act in stealth mode to circumvent and disrupt the immune system,” the researchers note.

Even more, fake food coloring can “activate the inflammatory cascade, resulting in the induction of intestinal permeability to large antigenic molecules.” In other words, food dye can cause leaky gut.

And finally, food dyes can lead to autoimmune reactions and even neurobehavioral disorders.

This brings us back to concerns over the association between food dyes and ADHD, which The Centers for Disease Control (CDC) says that there’s been a 41% increase in diagnoses of ADHD in boys of high-school age during the past decade.

And I’ll leave you with one more reason to avoid food dyes. A 2021 study in Cell Metabolism says that the two most abundant food colorants in the world, Red 40 and Yellow 6, can trigger colitis in mice.

The moral of the story: learn to read food ingredient labels, and every consumer product label for over-the-counter medicines and cosmetics. Although they might be slightly more expensive, try to find organic or natural alternatives. And remember to eat real food!